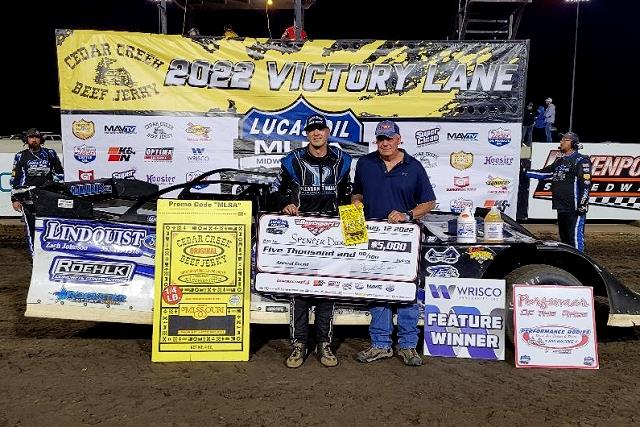 DIERCKS THRILLS IN FRONT OF HOMETOWN CROWD FOR MLRA VICTORY

Davenport, IA (August 12th, 2022) – Spencer Diercks may have been denied his first ever Lucas Oil MLRA win on Thursday night at the CJ Speedway by one position, but he came back swinging on Friday night and captured an emotional $5,000 MLRA victory in front of his hometown fans at the Davenport Speedway.

The 26 year old driver, behind the wheel of a new Longhorn by Wells Chassis, swept the entire night from start to finish including the DirtonDirt Fast Time Award with a lap of 13.354 seconds along with top honors in his respective heat race. The heat race win would line him up on the front row alongside Chris Simpson for the 30 lap “A” Main.

At the drop of the green Diercks immediately assumed control running the low line while Chris Simpson took the long way around the speedway in search of momentum. On the second lap, Simpson was able to secure just enough of an advantage exiting turn four to grab the race lead at the line.

Diercks would stay true to the low line and just two laps later drove back by Simpson for the lead. It did not take long for the leader to build up a two plus second advantage over the field, but lap traffic proved to be the equalizer and allowed Simpson to close the gap in the late stages of the caution free event.

With Chris Simpson reeling in Diercks, MLRA point leader Chad Simpson was hustling the high line as the top two both worked the low side of the speedway. Chad Simpson would drive by for the runner up spot on lap 26 but was not able to get any closer to Diercks who would hold on for a 1.271 second victory. Chris Simpson would come home in third for the second night in a row, followed by Frank Heckenast Jr. and Kolby Vandenbergh to round out the top five.

“If it’s anywhere in the world I’d like to get a win it’d be here,” stated Diercks in Cedar Creek Beef Jerky Victory Lane. “I’m from here and I’ve always had bad luck here, but it’s been treating me nice lately. I’m just a dumb concrete guy and I just do this for fun, I’m just speechless.”

“I knew he was out there,” Diercks noted of Chris Simpson in the early going. “But I’ve ran here enough to know that cushion was way up there and it was black all the way up there. It was going to take somebody crazy to get up there and I knew he (Chris Simpson) was kind of a bottom feeder so I stuck down there and stood in my line and there we go.”

Chad Simpson’s runner up finish marked the sixth podium finish of the season for the MLRA point leader. “My guys were pointing me to the top there and I was surprised early on it wasn’t as good as it was but it really came in there in the end, said Simpson.” “We struggled last night and a little bit early on tonight, but hopefully were rolling into something here and we can kind of carry it into tomorrow.”

Friday nights third place run marked the third such occurrence of the season for Chris Simpson with the MLRA. “I knew if I stayed up top, since they only allow us run one tire, that I would have burnt the right rear off in another five laps staying up there, so I had to get down. I hate finishing third, but there are a lot of guys that dream of running third to these guys, so we’ll take it and move onto tomorrow night and see if we can get a couple spots better.”

The Lucas Oil MLRA will wrap up their three night weekend swing on Saturday night with a return visit to the Maquoketa Speedway. Defending race winner Tony Jackson Jr. will look to defend his win from a year ago and cash in on the $5,000 top prize.