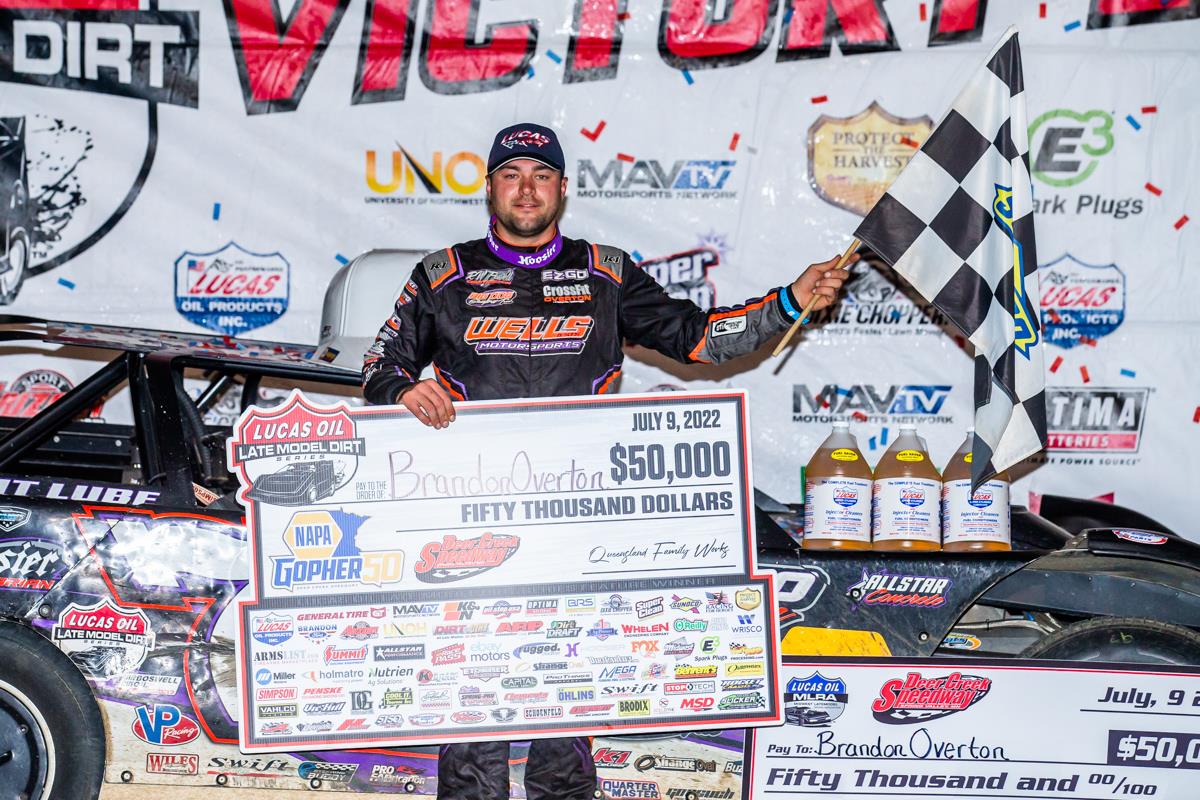 When Overton took the race lead on lap 23, he had to hold off both Madden and Tim McCreadie as both of those drivers were breathing down his neck when a caution flag came out with three laps to go. McCreadie and Mike Marlar also led laps during the race.
?
On the restart Overton held his line to score his third Lucas Oil Late Model Dirt Series win of the year and first big payday of 2022, winning by 0.514 seconds over Madden. McCreadie with his third-place finish is now the new Lucas Oil Late Model Dirt Series point leader with the series heading to I-70 Speedway in Missouri on Thursday night for the first time. Brandon Sheppard who entered the event as the series points leader finished 20th and now trails McCreadie by 50 points in the chase for the $150,000 to win national championship this year.

Both front row starters for the richest race ever at Deer Creek, Jonathan Davenport and Madden accepted the money challenge of a $25,000 bonus from Tralo Companies and Speedwerx they would give up their front starting positions and start 11th and 12th. If one of those two drivers would have won the race, they would have earned a $75,000 payday for winning the race. Marlar finished in fourth with Ricky Weiss rounding out the top five finishers.

In Lucas Oil Victory Lane for the 14th time in his career Overton becomes the sixth different winner in six series races that have paid $30,000 or more to win in 2022. “I probably just got lucky there at the end. You have heard of the phrase ‘sittin’ duck’ that’s what I felt out there. I know Madden had come from a ways back. I tried to not slip the tires there on that last restart. He (Madden) has been awfully good. Like I said, what an unbelievable feeling to get us one at Deer Creek. I am as happy as I could be.”

Madden, who started 12th had a run-on Overton until the Stop Tech caution flew with three to go, did not regret his decision. “No, not at all we had the $75,000 won and we had a lapped car three laps down get into the right front of my car, without that we are celebrating in victory lane. We had the best car, and we came from 12th and put on a heck of show for these fans. Thanks to all of the fans for coming out and supporting us and thanks for putting up the extra money and giving us a shot at it. We came up one spot short. Congratulations to Brandon on the win.” Madden took home $20,000 for his runner-up finish.

McCreadie, the reigning series champion still had a shot for the win at the end of the race but rounded out the podium in third. “I try my hardest, but at that point once Chris got by me, he did such a good job. Knowing where he started, I was trying as hard as I could I just kind of had a catbird’s seat to see what those two were going to do at the end.” McCreadie earned $10,000 for his third-place run.