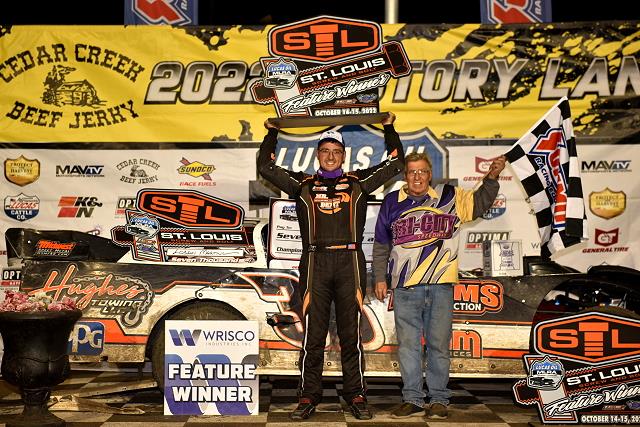 Pontoon Beach, IL (October 15th, 2022) – Logan Martin came up one spot shy of Cedar Creek Beef Jerky Victory Lane on Friday night at the Tri-City Speedway, but the 26 year old from West Plains, Missouri would not be denied on Saturday night as he went on to capture the win in the Lucas Oil MLRA’s season finale.

Martin started the main event from the eight spot on the grid, and made a slow but steady climb towards the front in the early going of the 40 lapper. Frank Heckenast Jr. led the field to the green from the pole after laying claim to the nights DirtonDirt Fast Time and winning his respective heat race. However, outside front row starter and veteran Billy Moyer took command of the field at the drop of the green from the outside pole and led the first nine laps.

A lap eight caution bunched up the field and Brian Shirley took advantage of a Moyer bobble, snagging the race lead on lap 10. For the majority of the event it looked like for the second year in a row Shirley would capture the win in the MLRA finale, as he built up a lead of over five seconds as the field closed in on the final ten laps. With Shirley in control Martin and Heckenast Jr. wagged a great side by side battle for second with Martin getting the position just before the races second cation waved with 13 laps to go.

Martin elected to restart on the bottom and Heckenast Jr. drove back by for the runner up spot just before the nights final caution waved for debris one lap latter. This time around Martin took the spot back and began his pursuit of Shirley. Just as he did one night ago, Martin took his XR1 Rocket Chassis to the high line of the track and quick reeled in Shirley. As the leaders entered turn three coming to five laps to go, Martin made the Swift Springs Move of the Race diving to the bottom and sliding up in front of Shirley. The leaders made contact and both nearly came to a stop, but it was Martin getting back to the throttle first to take over the top spot.

Martin managed to driver away from Shirley in the closing laps, scoring his second career Lucas Oil MLRA win by a 1.433 second margin over Shirley. Rusty Schlenk finished out the podium in third after starting in tenth. Moyer hung on for a 4th place finish while modified ace Mike Harrison made the charge from 18th to finish in fifth.

“It’s just awesome, Martin said of his $7,000 triumph. “I’m typically not that great here, so to come out here and be able to pick up a big win here at the end of the year means a lot for our whole team. Kevin Gundaker has a super facility here and had us an awesome track tonight.” Martin continued in saying, “The track was super top dominant. I want to apologize to Shirley and his crew, I think I got into him down there when I passed for the lead which for sure was not our intentions. I’ve got a ton of respect for that guy (Shirley) and hate that we made contact down there. I don’t get to run very many MLRA races any more so I’m just thankful for the ones we do get to win and appreciative.”

Martin dedicated the win to Hayden Ross, the young Oklahoma late model racer who passed away unexpectedly this week. “Hayden was definitely riding with me tonight and I want to dedicate this win to him,” concluded Martin.

The nights third place finisher Schlenk commented after the race, “I love this place man, and that’s why we make the seen hour trip over here all the time. It’s one of my favorite places to race. Top, bottom, middle you can race all over this thing. I like when it rolls up a little cushion on the wall too because it kind of separates the men from the boys. I think I sealed my right front tire off at the end, after we went back green I had no right front tire and I couldn’t steer at all anymore so I was kind of relying on the cushion. If it wasn’t for that I think we were kind of hanging with Logan for most of the race and might have been able to have given him a run for his money.”

CHAD SIMPSON CROWNED 2022 LUCAS OIL MLRA CHAMPION
Chad Simpson wrapped up his third career Lucas Oil MLRA Championship on Saturday night at the Tri City Speedway. The Mount Vernon, Iowa driver collected two wins on the season enroute to the $20,000 title, which was his first as an owner and driver.

"This is the first year for me as a car owner to do this," said Simpson. "My entire family and my crew guys are here, unfortunately we are missing a couple of crew guys that couldn't make it this weekend , but hats off to everybody that helps us to be able to do this. It's definitely a long battle all year long."

"Everyone of them means something special," he said of his three MLRA titles. "It's a lot of work all year long and its a lot of up and down the road, and we miss a lot of stuff-- birthdays, weddings, and things like that at home, but we came out on top and they get to come down here and celebrate this with us."