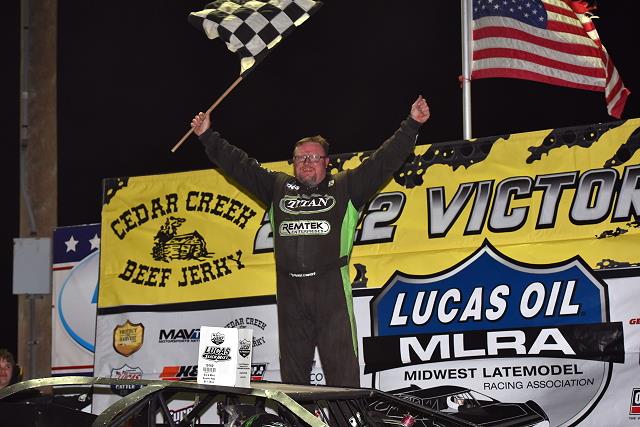 Maple Park, IL (October 1st, 2022) – Leading up to Saturday night at the Sycamore Speedway, Jason Feger remained winless in Lucas Oil MLRA action. All of that changed with a single move in the weekend finale of the Harvest Hustle, as Feger wired the field for his first MLRA win earning him an emotional $7,000 victory that he dedicated to Late Model Hall of Fame announcer Rick Eshelman.

MLRA Series point leader and Friday night winner Chad Simpson led the field to the green alongside fellow heat race winner Dennis Erb Jr. With everyone expecting a battle for the lead between the front row starters, Feger had plans of his own, and made what would be the “Swift Springs Move of the Race” on the opening lap of the 50 lap feature event.

Feger rolled from third on the grid and immediately dove to the bottom of Simpson in turn one and two, seizing the lead as the lead trio exited turn four on the first lap. The first of five caution periods would quickly reel Feger back in as the yellow flew for a Mike Provenzano spin on lap three.

Feger lead the field back to the green with Friday nights runner up Brian Shirley in second and Simpson holding onto third. The top three would stay unchanged leading up to the nights second slow down on lap five. By the time the third caution waved on lap 18 Jeff Larson had made his presence felt, charging into third behind Shirley from his seventh starting spot.

Following back-to-back cautions on laps 18 and 19 the field would go on the longest green flag run of the night with Feger leading Shirley well into lapped traffic. After falling behind by over two seconds, Shirley used the lapped traffic to reel Feger back in, pulling up alongside to battle for the top spot just before the nights final caution waved with just ten laps to go.

On the restart Larson tried to pull off the upset and charged to the top side of the speedway while both Feger and Shirley circled the low line. Larson would have a great run off the exit of four, but before he could capitalize he hooked the top side cushion allowing Feger to distance himself. Feger would go on to capture his first career Lucas Oil MLRA win by 2.444 seconds over Larson who scored a career best MLRA finish in the runner-up spot. Shirley got his second podium finish of the weekend in third, followed by Simpson and Erb Jr.

Following his first trip to Cedar Creek Beef Jerky Victory Lane Feger commented, “We tried a little bit of different stuff tonight and it was really good and the car worked awesome. We just got a really good jump there on that start and I was just going to try and keep in on the bottom as much as I could and try and make them guys pass me or make a mistake. It was definitely never racking,” he continued. “I got into a good rhythm and the yellow would come out and I felt like it took me five laps to get back in a rhythm.”

“You’ve got to dedicate this to Rick Eshelman, our sport lost a great guy today,” said Feger on the sudden passing of World of Outlaws Late Model Series Announcer. “There’s no one like him, he always made you smile and talked to everybody and was just a great guy. I’m glad we were able to pick up the win, and we will honor him tonight and think about him and get back to work.”

Larson’s runner-up finish put a strong exclamation point on the weekend for the Curless Motorsports team. “Just to run up there with them guys tonight was amazing to me,” said Larson. “I got into the wall there with about four to go going into one trying to get a run on Feger. He had the good car tonight, obviously leading the whole thing, and I’m very happy with second.”

Shirley was the only driver to record a pair of podium finishes on the weekend with his third place run and noted, “We’re trying to work a little bit of the kinks and bugs out of where were at with our car. We had a good car, that last caution, just the way Jason restarted it stalled my lane a little bit and let Larson get a good run on the outside and he was able to do a good job and maintain the last ten laps. We keep digging and working and getting a little bit better so we’re going to keep racing and try to get ourselves back to where we need to be and soon enough we will get some wins.”

Championship weekend is up next for the Lucas Oil MLRA October 13th – 15th. For the third consecutive season the Tri-City Speedway in Pontoon Beach, IL will play host to the MLRA’s championship weekend, with a Thursday night practice session getting the weekend started. Friday nights main event will pay $5,000 to win, while the Saturday nights season finale will feature a $7,000 to win “A” Feature.