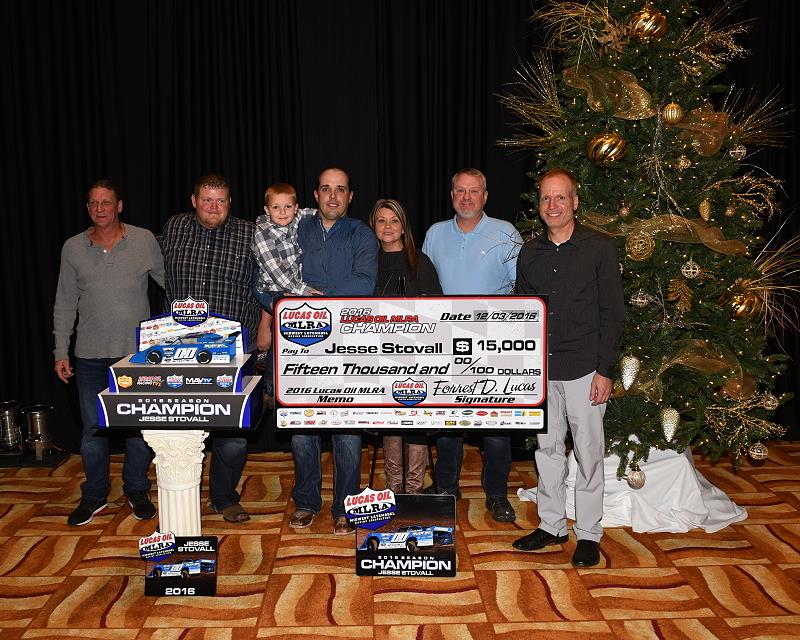 (Kansas City, MO) — Saturday evening the Lucas Oil MLRA officially put the wraps on the 2016 season with the annual Championship Awards Banquet. Held at Harrah’s Casino in Kansas City, Missouri, the evening paid tribute to the top ten is series points and highlighted the accomplishments of Series Champion, Jesse Stovall and Sunoco Rookie of the Year, Tad Pospisil.

The night started with a social hour, then opening remarks from Series Director, Dan Robinson prior to dinner. Following the meal, Assistant Series Director, Ernie Leftwich took the stage and thanked all of the marketing partners for their support, track promoters, staff and other key individuals to the series.

There was a special mention and photo slideshow dedicated to longtime series photographer Lloyd Collins, who is stepping away from the series for the upcoming season. Collins has been apart of the Lucas Oil MLRA for the past ten years.

The awards portion of the program was the final order of business for the evening. In addition to dispersing the $44,000 total series points fund, there were many season long awards handed out too.

Jesse Stovall amassed five wins on the tour this year with victories at Southern Iowa Speedway, I-80 Speedway, Adams County Speedway, Deer Creek Speedway and Lucas Oil Speedway. His championship share of the points fund is $15,000.

Tad Pospisil had a season best runner up finish at Junction Motor Speedway in his maiden trek though the Lucas Oil MLRA schedule. His lucrative bonus, courtesy of Rookie of the Year sponsor Sunoco Race Fuels, consists of $2,500 and six barrels of his choice of fuel for the coming season.

This week Lucas Oil MLRA officials will be busy at the Performance Racing Industry Trade Show, held annually at the Indiana Convention Center in downtown Indianapolis, Indiana. They will meet with racers, marketing partners and various other industry insiders, in preparation for the 2017 season and beyond.

For all of the latest news and information fans are encouraged to visit the series website at www.MLRARacing.com.