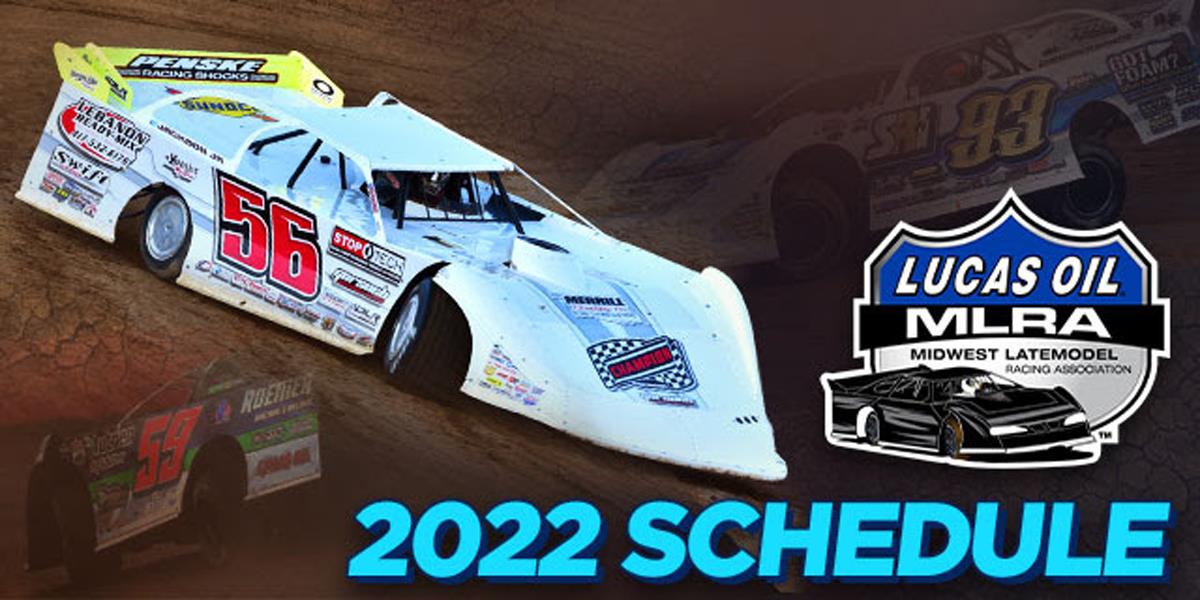 Entering the series 34th consecutive season of action, all main events will now pay a minimum $5,000 to win, while also seeing a jump in the number of $7k and $10k shows on the schedule as well. The MLRA is currently slated to compete at 15 different venues, including a pair of first time tracks in the season ahead.

The 81 Speedway in Park City, KS will kick off the 2022 MLRA season with a double header weekend on April 8th & 9th paying $5k & $7k respectively. The 3/8-mile facility returns to the schedule for the first time since 2003.

The month of April will end with two big traditional weekends. Action gets started on Thursday night April 14th at the Davenport Speedway in an event promoted by Ricky Kay of K-Promotions. Drivers will spend the next two nights at the 34 Raceway in West Burlington, IA. The second annual Prelude to the Slocum will take place on Friday night, followed by Saturday nights 14th Annual $10,555 to win Slocum 50.

The following weekend of April 22nd & 23rd will take teams to the Lucas Oil Speedway in Wheatland, MO for the first of four trips on the season. The Spring Nationals will offer up back-to-back nights of action with $5k & $7k on the line.

Lake Ozark Speedway just outside of Eldon, MO has traditionally been a mid to late season venue for the series but slides up in 2022 to May 6th & 7th for the annual two day “Battle at the Beach”.
The month of May ends with the running of the 30th Annual Show-Me 100 at the Lucas Oil Speedway, an event co-sanctioned with the Lucas Oil Late Model Dirt Series (LOLMDS). Two full nights of qualifying action will start the Memorial Day weekend off on Thursday and Friday with the Cowboy Classic and the Tribute to Don & Billie Gibson. One big change will await drivers on Saturday as the weekend finale has jumped from a $30k to a $50k to win main event.

The series returns to action on June 24th with a trip to the Rapid Speedway. This will mark just the second ever visit for the MLRA to the 3/8 mile famed fairgrounds facility located in Rock Rapids, IA.

The following night will showcase the first of two new venues in 2022, with a stop at the 1/3 mile Off Road Speedway in Norfolk, Nebraska. Both events on the weekend will be $5,000 to win.
A busy month of July starts with a stop at the 300 Raceway in Farley, IA on Friday night July 1st. Series officials are working on finalizing plans for a Saturday night event to complete the weekend, which will be announced soon.

For the second year in a row the MLRA will join the LOLMDS in co-sanctioning the NAPA Auto Parts Gopher 50 at the Deer Creek Speedway in Spring Valley, MN. This crown jewel event will move from a two day to three-day event July 7th – 9th with a huge $50,000 pay day awaiting Saturday night’s winner.

The I-70 Speedway in Odessa, MO will mark the second first time venue for the series on Thursday night July 14th. This $10k main event will be co-sanctioned with the LOLMDS and lead up to Saturday nights $15k to win co-sanctioned Diamond Nationals at the Lucas Oil Speedway. The trifecta weekend will conclude with a stand-alone MLRA show at the Randolph County Raceway in Moberly, MO in the 2nd annual running of the Weiner Nationals which will boast a $10,000 top prize.
The lone weekend of action in August will include a stop at the Maquoketa Speedway on Saturday August 13th for the Timber City 40. MLRA officials plan to announce a second weekend venue in the coming weeks.

Labor Day weekend will find the MLRA returning to its roots at the Lakeside Speedway in Kansas City, KS for the annual Clyde Ellis Memorial on Friday September 1st, before wrapping up the weekend on Saturday night at the Lucas Oil Speedway for the Ron Jenkins Memorial.

Sycamore Speedway in Maple Park, IL returns to the schedule for the second year in a row with the Harvest Hustle weekend on September 23rd & 24th. For the third consecutive season the Lucas Oil MLRA will crown its season champion at the Tri-City Speedway in Pontoon Beach, IL on October 14th & 15th. Both weekends of action will feature $5k & $7k to win features on Friday & Saturday respectively.
2022 MLRA WINNERS CIRCLE PROGRAM
The MLRA will continue it's "Winners Circle Program" in 2022 awarding $200 in Appearance money to the top (10) in points at each venue with perfect attendance, in addition to purse money earned. For full program details contact Series Director Ernie Leftwich.