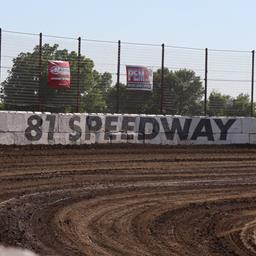 CORRECTION: The original release of this article had announced the Saturday April 9th MLRA event as paying $10,000 to win. In the MLRA's full schedule release on November 8th, their schedule indicated a $7,000 winners share. After verification with both 81 Speedway and MLRA officials, $7,000 to win is the correct amount for the Saturday April 9th event. The original article below has been edited to reflect the correct information.

While the ink is barely dry on the 2021 race season here at 81 Speedway, it's full steam ahead as Speedway officials are hard at work getting the 2022 schedule and division details put together. On last night's episode of Above the Cushion presented by The Auto Medic, General Manager John Allen released information on a few details regarding 2022.

The first date confirmed will put a bow on the 2021 season. After last season's Awards Banquet was cancelled due to the COVID-19 pandemic, the 2021 Season Awards Banquet will take place on January 22nd, 2022 at the Best Western in Park City. More banquet details and ticket information will be released in the coming weeks.

The big reveal of the program came in the way of a pair of confirmed season opening dates featuring the American Bank of Oklahoma American Sprint Car Series Sooner Region presented by Smiley's Racing Products and the Lucas Oil Midwest Latemodel Racing Association.

The 2022 season at 81 Speedway will kick off on Saturday April 2nd with a show headlined by the ASCS Sooner Region. The following weekend the Lucas Oil MLRA series will double dip on back to back nights Friday April 8th and Saturday April 9th, the first double header at 81 Speedway under FOE Enterprises. Battling for $5,000 to win on Friday and $7,000 on Saturday, it promises to be a HUGE weekend for the super late model series. A practice session open to all cars has also been scheduled for Thursday April 7th.

Another confirmed date will see the return of the USAC Border Wars event featuring the Wingless Sprints Oklahoma vs. the Midwest Wingless Racing Association. The 3rd annual event has been set for June 25th.

Also of note, on top of new Super Stock division rules having already been released earlier in the month, a minor change in the tire rule for the Stock Car division is being made as well. After a "grace period" for drivers to use up current inventory, the Hoosier 500 tire will no longer be allowed for the Stock Cars in 2022. The IMCA stamped Hoosier G60 and the American Racer KK704 G60 will be the two tires allowed in the Stock Car division.
The grace period end date will be released at a later time.

With more exciting news and race events in the works, be sure to tune in to Above the Cushion every Thursday night at 6 pm central for all of the 2022 season information as it is released. The show can be heard locally on 1410 AM/93.9 FM KGSO, or nation wide by searching for 'KGSO' on the TuneIn radio app. You can also catch a live stream of the show each and every week on Facebook at https://www.facebook.com/race81Speedway