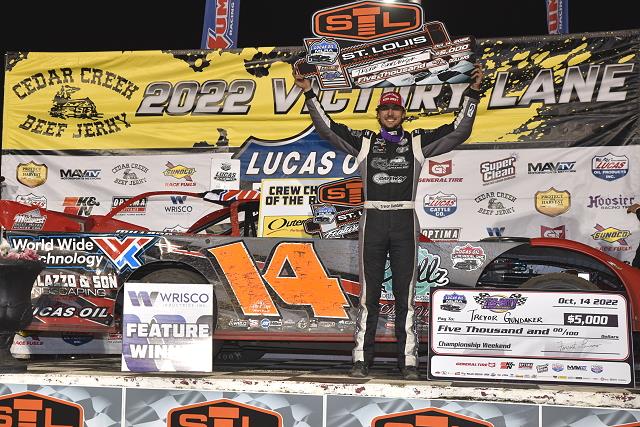 Pontoon Beach, IL (October 14th, 2022) – What started out as disaster with a broken motor during Thursday nights practice session at Tri-City Speedway ended in a career victory for Trevor Gundaker, as the St. Charles, MO driver captured his first career Lucas Oil MLRA victory at his home track on Friday night.

With a broken rocker arm, Gundaker appeared to be sidelined for the weekend, but long time sponsor Reid Millard loaned out his primary car to the 19 year old Gundaker to keep his weekend rolling. Gundaker set the DirtOnDirt Fast Time with a lap of 15.047 seconds which led him to an eventual third row inside starting spot for the thirty lap main event.

Austin Vincent rolled from the Lucas Slick Mist pole for the first time in his career alongside of modified ace Mike Harrison. Vincent would take control on the first lap, but his reign at the top was short lived as Harrison used the high line to take the lead on lap two. Harrison jumped out to a near two second lead as the first twelve laps went caution free. With lap traffic just in front of Harrison, Gundaker began closing in on the leader before the first caution waved for debris.

On the restart, Gundaker continued to roll the low line of the speedway and used a strong turn four exit to grab the top spot as the field took the cross flags. The second caution of the night slowed action on lap 19 as Rusty Schlenk slowed down the back stretch. With Gundaker controlling the top spot it was ninth starting Logan Martin charging to the front, running in third when the final caution waved with just six to go.

Gordy Gundaker was scored in second on the final restart and elected to restart on the bottom putting Martin on the top line, the same line he used on his march to the front. On the restart, it looked like it would be a Gundaker 1 – 2 finish as the brothers battled it out in the closing laps. Trevor Gundaker bobbled with two laps to go, but it would not be enough as he went on to record his first career MLRA victory and the $5,000 pay day. Martin slipped past Gordy in the final laps to finished second. Brian Shirley came home in fourth while Jason Feger rounded out the top five.

“We unloaded for practice last night in our primary car and heard a tick in the motor and a rocker bearing went out and nobody around hear had the right rocker, the right parts to fix it,” explained Trevor Gundaker on his Thursday night woes. “Luckily our great sponsor Reid Millard, Millard Family Chapels, was coming down here and I called him and asked him if I could run his car, and thank God he said yes because we’re standing here in victory lane.”

It was an emotional Cedar Creek Beef Jerky Victory Lane for Gundaker, as he dedicated the win to Mark Eckman, primary sponsor with Gateway Powder Coating who recently passed away. “We we’re just good all night, and tweaked on the little things after hot laps just to get it to my driving style and made very small adjustments all night. I’ve got to thank Chris (Carter) and Reid for letting me drive this tonight—the car was pretty good!”

Martin came one sport shy of his second career MLRA win noting, “Props to Trevor and his whole team, it was cool to see him win this deal especially here at his home track. Our car was good enough, we just buried ourselves too deep and I just wasn’t consistent enough as I needed to be up on the cushion and I kept making mistakes and bobbling. And then them last six laps with that restart, I just kind of went full send and I clipped the wall down the backstretch and knocked the right front lower off it, and hit the wall down here in three and four I felt like and knocked the spoiler and deck out of it. We ran second and just had a second place car tonight.”

Big brother Gordy Gundaker who finished out the podium joking said of his top three run, “Logan ruined the party, I really wanted to run first and second that would have been pretty neat. It’s crazy, I can’t win here but Trevor sure can, so if I’ve got to be on the podium and run third behind somebody it better be my little brother.”

The Gundaker brothers shared a moment in victory lane following the win and when asked what was said Gordy replied, “I told him he was a little shit head for beating me. I made a mistake early and it open the door and he did it and the time he made a mistake I wasn’t there. It’s really really cool to do this at our home track, in front of a lot of family and friends. I’m glad to finally have a good night, we have been struggling so to have a podium finish is great.”