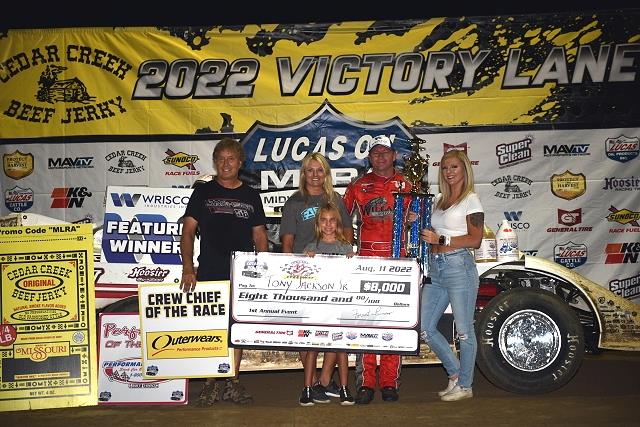 Columbus Junction, IA (August 11th, 2022) – Following what one can describe as a rocky and disappointing start to the 2022 season, Tony Jackson Jr. lived up to his nick name “Prime Time”, in grabbing an impressive Lucas Oil MLRA win in the series first ever stop at the CJ Speedway in Columbus Junction, IA on Thursday night. Jackson debuted a brand new Capital Chassis in what was just his first series start since a 24th place finish at the Lucas Oil Speedway back on April, 23rd.

At the onset of the night it looked like Spencer Diercks was going to be the man to beat, after scoring the nights $500 DirtonDirt.com Fast Time Award, and another $250 bonus for winning his respective heat race. Diercks was making just his second start behind the wheel of a Longhorn by Wells Chassis and wasted no time in taking control of the nights 30 lapper.

The first of two cautions would wave on lap two for Rickey Frankel who slowed off the exit of turn two. The next 22 laps would go green with Diercks showing the way. Under the green it didn’t take long for the Davenport, IA driver to find lap traffic setting up a great battle with Jackson for the top spot. On multiple occasions Jackson would close the gap only to see Diercks stretch the advantage back out to comfortable margins once in clean air.

As the duo worked lapped traffic, Jackson seized an opportunity to take the top spot exiting turn four and grabbed the lead by the narrowest of margins at the line with just six laps to go. Diercks immediately returned the favor in turns one and two and reclaimed the lead, but before the leaders could get back to the line the caution would wave for the 25 car of Chad Simpson who slowed in turns one & two giving the lead back to Jackson.

On the ensuing restart Jackson wasted no time in jumping out to the lead and would cruise uncontested for the final six laps to capture his 12th career Lucas Oil MLRA Win by 1.711 seconds over Diercks. Thanks to $3,000 in added bonus money Jackson turned a $5,000 win into an $8,000 payday.

Diercks would score an MLRA career best finish of second while Chris Simpson used the late restart to grab the final podium position. Frank Heckenast Jr. finished in fourth while Daniel Hilsabeck picked up his first top five of the year and the nights Sunoco Race Fuels Rookie of the Race Award.

Jackson was all smiles in Cedar Creek Beef Jerky Victory Lane following the main event, and reflected on his rough start to the season. “I was so frustrated a month ago, but I can’t say enough for Marshall Green, Shane Clanton, and Capital Race Cars.” In his 25th anniversary season behind the wheel he continued in saying, “You know you can use your tires up and I could kind of tell he was struggling off of two there, so I was kinda waiting and sometimes you’re lucky and sometimes you’re not. So when I decided to make the pass on him I got him and luckily the yellow came out.”

“I’m pumped up now,” exclaimed Jackson. “When you suck for so long you start to think it’s you, but man what a good race car.”

Diercks will take his 2nd place run and momentum to his hometown of Davenport, IA on Friday night where he will again look for his first series win. “I couldn’t see my signal guy and didn’t really know where anyone was at,” noted Diercks. He (Jackson) was there and I had no idea, and he beat me to the flagstand and then the yellow came out. It is what it is, but I’m so proud of my team it’s the second night on our car and I can’t thank Longhorn by Wells enough. I wish we could have got that but it is what it is, and the car is in one piece, and its fast, so we’ll take it.”

Simpson's run to the podium was a good shot of medicine after feeling under the weather for most of the week. “This is a brand new car, we had never raced it yet. It’s pretty good, a little free, so we’ll get the other one out for tomorrow and see if we can plug one off tomorrow or Saturday. I’ve been sick all week so it’s good to get out here, sweat a little bit and put on a top three run.”

Two more nights of Lucas Oil MLRA action are on tap for the weekend as the series now heads to the Davenport Speedway in Davenport, Iowa for a ¼ mile showdown on Friday night August 12th. The weekend will conclude on Saturday when the MLRA returns to the Maquoketa Speedway in Maquoketa, IA for their only visit of the season. Both remaining events on the weekend will pay $5,000 to win and $500 to start.