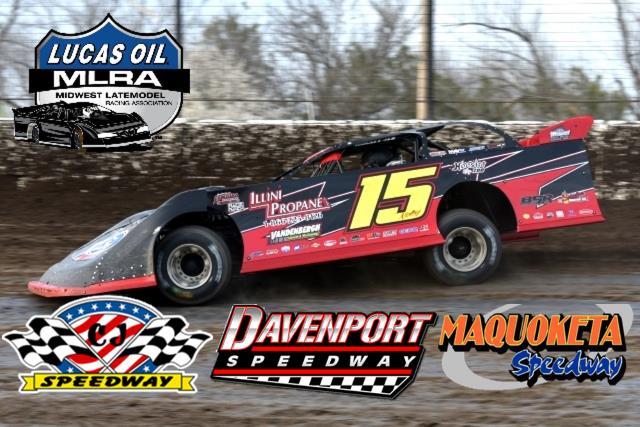 Wheatland, Missouri (August 9th, 2022) – After nearly a month off, the Lucas Oil Midwest Late Model Racing Association (MLRA) returns to the dirt in a big way with three nights of action this upcoming weekend across a trio of Eastern Iowa venues. A weekend total of over $18,000 to win will be on the line if a single driver can sweep all three nights of action, with all events paying a minimum of $500 to all “A” Main qualifiers each night.

Johnny Scott of Las Cruces, NW continues to show the way atop the MLRA’s Midwest Sheet Metal Challenge Leader Board by virtue of his five series wins to date, including a $15,000 triumph at last month’s Diamond Nationals. Chad Simpson enters the weekend just 30 points behind Scott and will have the luxury of racing close to home this weekend as he pursues his third career MLRA title.

Sunoco Rookie of the year leader Kolby Vandenbergh of Ashland, IL has a pair of top five finishes to date and holds down third, while fellow MLRA Rookies, Daniel Hilsabeck and Steve Stultz round out the top five.

The weekend will get an early start when the series makes a first time visit to the CJ Speedway in Columbus Junction, Iowa on Thursday night August, 11th. This 4/10 mile semi banked oval was scheduled to be the MLRA’s lead off event for the 4th of July weekend until heavy rainfalls forced it to be postponed until this weekend.

Originally slated as a $5,000 to win “A” Main, fans and sponsors have upped the ante for the MLRA drivers as the winner will now driver off with $3,000 in bonus money making for an impressive $8,000 payday on Thursday night. In addition to the winner’s bonus money, a special $500 Hard Charger award is being offered along with a $250 pay out to the winner of each of the nights qualifying heat races.

Friday night rolls the series to the eastern edges of the Hawkeye state for a $5,000 to win ¼ mile showdown at the Davenport Speedway located on the grounds of the Historic Mississippi Valley Fairgrounds. This will be the second “take-two” event of the weekend, after mother nature washed out the events originally scheduled April date. The MLRA has been a staple at the Davenport Speedway for a number of years but this will be the first time the MLRA has been able to team up with K-Promotions and Ricky Kay for the event.

The Davenport Speedway has become a hot bed of late model racing in recent years with Friday expected to once again put on a great show. In 2021 Billy Moyer bested a 40 car field in the series first stop of the season, while Ricky Thornton Jr. collected the Davenport MLRA checkers just one month later. Iowa’s Chris Simpson is the only MLRA repeat winner to date at Davenport with three wins to his credit.

The weekend will conclude on Saturday night August 13th, with a stop at the Maquoketa Speedway in Maquoketa, IA. Tony Jackson Jr. picked up the Maquoketa win one year ago enroute to collecting his second MLRA series championship. The weekend finale will be another K-Promotions event paying $5,000 to win and will mark just the fourth time in series history that the MLRA has visited the 3/8 mile semi-banked oval. Travis Dickes of Madison, NE and Chris Simpson are the only other drives besides Jackson to visit victory lane in MLRA action at the Jackson County Fairgrounds venue.

Each driver will have (4) tires marked, and they must retain the same compond for the duration of that nights event. If a driver changes a flat, to retain position they must replace it with the same compound as the flat and it needs to be a used tire. If a flat tire is replaced with a new tire, the driver will go to the tail of their next race in the event.