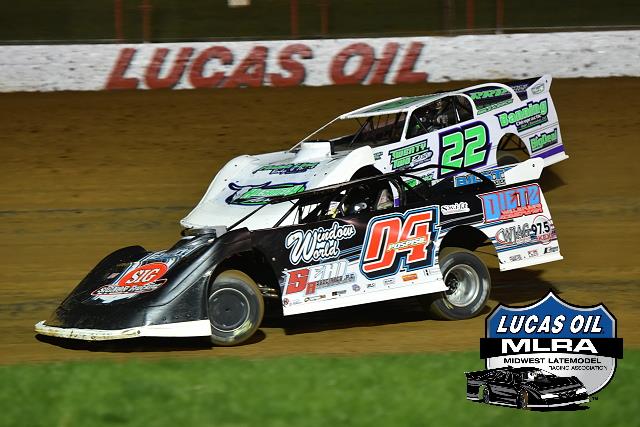 MLRA Heads To Off Road Speedway For "Renegade 50"

Wheatland, Missouri (June 22, 2022) – Following a three week break in the action, the Lucas Oil Midwest Late Model Racing Association (MLRA) returns to the dirt this weekend with a two night stand at the Off Road Speedway in Norfolk, NE. This weekend’s tour stop will be the only stop of the season in the Cornhusker state and the first ever visit to the 1/3 mile facility for the MLRA Series.

Friday night June 24th, will get the Renegade Stores weekend underway with a complete show for the Late Model stars dishing out $3,000 to the winner and $400 to start. The weekend will culminate on Saturday when drivers return for the highly anticipated “Renegade 50” which will send the winner home with a $5,000 pay day and $600 for all A-Main qualifiers.

After just six events Johnny Scott of Las Cruces, New Mexico stands on top of the Midwest Sheet Metal point leader standings. The former modified standout has three MLRA wins to his credit this season, including the Tribute to Don & Billie Gibson preliminary feature at last month’s Show-Me 100. The margin at the top however is still very tight, as Chris Simpson sits just 45 markers behind Scott and just 10 in front of brother Chad Simpson, who is coming off of a strong top five run in the 30th Annual Show-Me 100.

Current Sunoco Race Fuels Rookie of the Year leader Kolby Vandenbergh of Ashland, IL is also off to a good start in 2022, he not only leads the series rookie standings but also holds down the fourth spot in the series overall standings. Rounding out the top five is former MLRA winner and Norfolk, Nebraska resident Tad Pospisil, who will look to get back to Cedar Creek Beef Jerky Victory Lane this weekend for the first time since his triumphant win at the Junction Motor Speedway back in 2017.

Pospisil jumped out to a fast start in 2022, snagging a pair of Dirt On Dirt Fast Time Awards and setting back-to-back track records in the series opener at the 81 Speedway in Wichita, KS. This weekend the driver of the 04 will again be a favorite to contend for the win at Off Road Speedway, a facility where he established the track record one season ago with a lap of 13.878 seconds.

“It’s going to be awesome,” noted the 34 year old driver of the upcoming weekend home stand. “All of the MLRA shows are like 6 to 8 hours away for me, so five minutes is really cool. I know the city of Norfolk and all of the surrounding area is pretty excited about being able to have a Lucas Oil MLRA race here too.”

Opening in 2015, the Off Road Speedway underwent some changes this past off season that have made the track even more racier than in the past. “Over the winter they re-did it and put some more progressive like banking on it. They used to kind of race around the bottom and middle, but now its kinds of moved around where you can race all over the race track,” he noted.

An aggressive schedule stands in front of the MLRA series drivers, as they prepare to tackle ten events over the course of a 23 day span starting this weekend. While the home track should be kind to Pospisil this weekend, he’s quick to note that the home field advantage likely won’t last long against his fellow MLRA competitors.

“I’d guess about 90% of the guys with MLRA haven’t seen it (Off Road Speedway) before, so obviously there is a little advantage there for me on it. But those guys go up and down the road and race a lot of different race tracks, so I’m sure they will adjust to it pretty quick.”