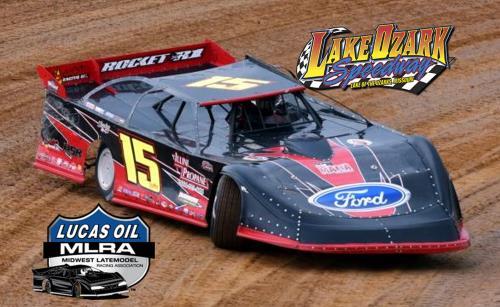 Wheatland, Missouri (May 3, 2022) – Lucas Oil MLRA action reignites this Friday and Saturday May 6th & 7th at the Lake Ozark Speedway with the running of the “Battle at the Beach”. This second annual event moves up from its traditional late summer date, and will again feature two nights of action at the 1/3 mile semi-banked clay oval just outside of Eldon, Missouri.

Friday night’s opener will feature a $5,000 to win main event, before wrapping up on Saturday night with a $7,000 to win and $700 to start “A” main. Las Cruces, New Mexico’s Johnny Scott has laid claim to two wins on the season and continues to stand atop the MLRA standings over brothers Chris and Chad Simpson after four events. Defending Battle at the Beach race winner Payton Looney, will come into the weekend fresh off of his 6th career MLRA victory after winning the finale of the MLRA Spring Nationals at the Lucas Oil Speedway.

Kolby Vandenbergh races into the weekend as the MLRA’s leading driver in the Sunoco Race Fuels Rookie of the Year standings. The Ashland, Illinois driver was somewhat of a surprise addition to the MLRA tour and rookie race when the season got underway at the 81 Speedway in Wichita, KS last month, bringing even more depth to one of the strongest rookie classes to follow the series in recent history.

The 24-year old driver and Western Illinois University graduate, is like a number of other MLRA drivers being employed in a family business, Vandenbergh Concrete & Excavating. That commitment to customers and work provides its share of challenges when trying to also race a full tour schedule with one of the region’s top series.

“I hesitated at first to do the rookie deal because I didn’t know if we would be able to make the opener in Kansas, that race was the biggest question mark on the whole schedule for us. I was like man I don’t know if we are going to be able to make it, that’s in the spring which is typically our busiest time of the season when stuff is really getting up and busy around here. Luckily it was raining here at home and we had the car ready because we rained out the week before, so dad said this is a sign we gotta go.”

Through the first two weekends of action the results of that last minute decision have been rewarding for the driver of the Pro Power (Ford) Rocket XR-1 Chassis, collecting three top 10 finishes in a row, a heat race win, and his first career DirtonDirt.com Overall Fast Time Award, which came on night two of the MLRA Spring Nationals. “Our goal heading to Kansas was just to make both shows, but after we left there I was telling myself hey we can do this and be competitive.”

Vandenbergh began racing at 9 years of age in the Quarter Midget ranks, compiling over 100 wins and multiple regional championships. The first generation racer transitioned into late models at just 13 where he scored multiple victories in Crate Late Models, and has been racing in Super Late Models since the age of 16.

After moving into open late models much of the teams focus has been on racing at regional special events and other higher paying shows, compared to a dedicated weekly hometrack routine. “I don’t have a Super Late Model win,” noted Vandenbergh. “My dad has always believed that if you wanted to do this kind of racing competitively, that to be the best you have to race against the best. I feel with me being out of school now and being able to focus on the family business and racing that it allows me to have my head more in the game.”

The 2022 season will be the first time that Vandenbergh has embarked on any type of points racing journey since he started in late models. “I’ve never ran for a track championship, we’ve always just gone and tried chasing the big shows every year. We’ve got to where we didn’t make the shows, and then the next season we made it and started finishing races and getting the top ten and then top five finishes.”

“Ever since I raced in crate cars I have never worried about points because we’ve typically just ran the closest race or wherever was paying the best purse. I think that first weekend out it helped me because I wasn’t worried about points. For us it was just about performance out in Kansas. I told myself I wasn’t going to worry about that side of it until about halfway through this schedule and then this past weekend on the way home I catch myself looking at the points already and saw we were up to fifth. At that point I’m like man, I need to make sure I get some more heat wins and start up front.”

Prior to this weekend, Vandenbergh has just one start at Lake Ozark Speedway, which resulted in a 18th place finish in 2018. With nearly 60% of the 2022 schedule being new territory for him, he has resorted to technology in trying to prepare and get up to speed. “I’m so focused on the MLRA side right now with the confidence I have from the first two weeks. That Sunday after we got home from Wheatland I was sitting there watching film of Lake Ozark from a Summer Nationals race and past MLRA races. Film is a huge thing to me because you can always make yourself better, you can watch races over and over and see what you might have done wrong.”

Vandenbergh sits 5th in series points, and is joined by three other rookies in the top ten with Daniel Hilsabeck 7th, Trevor Gundaker 9th, and Jacob Magee 10th. “I know we have been Rookie of the Race a couple of times already but just like that final night at Wheatland Daniel got us there by one spot. It might come down to one spot at the end of the season and that might be what beats you. It’s just proof that MLRA is a good and competitive professional series to run with. It’s no joke. When you show up you still have to have your stuff right, be dialed in, and be ready to compete.”