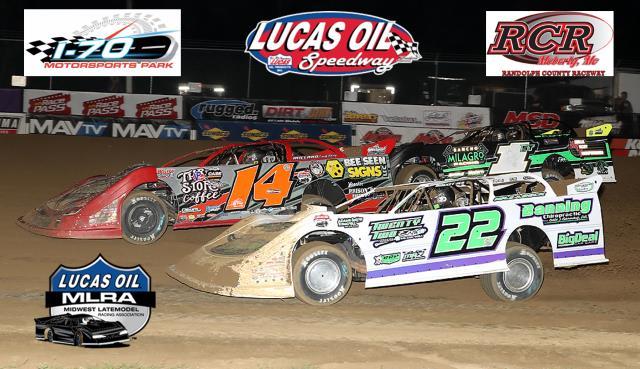 Wheatland, Missouri (July 12, 2022) – Another busy weekend awaits the teams and crews of the Lucas Oil MLRA as they prepare for their second consecutive three race weekend. After a three nights stand at the Gopher 50 last weekend, this time around they will mix it up competing at three different venues over the course of a four day span starting this Thursday night July 14th.

The rare Thursday night date will take the MLRA to the confines of the I-70 Speedway in Odessa, MO in a race that is co-sanctioned with the Lucas Oil Late Model Dirt Series (LOLMDS). After sitting idle for all of 13 years the track re-opened in 2021 to a limited number of events, with this weekend being the first opportunity for fans to see Super Late Models back on the dirt at the famed facility.

With the once asphalt surface removed and replaced with a dirt surface, it has also been reconfigured to 3/8 mile around the bottom while the top groove sits a strong ½ mile in distance. Thursdays nights feature winner will pocket a cool $10,000 in the weekend lid lifter event.

The MLRA series will take Friday night off, before returning to action on Saturday night July 16th at the Lucas Oil Speedway in Wheatland, Missouri. The 16th Annual CMH Diamond Nationals will again put the drivers from the MLRA series up against the always tough LOLMDS in another co-sanctioned event.

This one day show will put an impressive $15,000 on the line to go along with the coveted Diamond Ring that goes to the feature winner. Saturday will mark the fifth main event of the season at Lucas Oil Speedway for the MLRA, with current series high point man Johnny Scott winning two of the first four events. Former Show-Me-100 winner Payton Looney and reigning Show-Me 100 winner Chris Ferguson have also each recorded stops in Cedar Creek Beef Jerky Victory Lane at the Diamond of Dirt Tracks already in 2022.

The final leg of the weekend will conclude at the high banks of the Randolph County Raceway just outside of Moberly, MO with the 2nd Annual running of the Weiner Nationals. Last year Mike Marlar drove to the win in front of a near capacity crowd. The 2022 rendition will be the first time that the MLRA has sanctioned the event promoted by long time late model racer Reid Millard.

Millard and his team have been hard at work preparing the 3/8 mile track and sprucing up the facility since taking over ownership in late May of this year. Sundays MLRA event will be the tracks season opening event, and one that comes with yet another $10,000 to win and $750 to start feature event.

Along with the racing action on Sunday will be a Hot Dog Eating contest, performance featuring Murphy’s Ford Band, pre-race flyover, along with special guest University of Missouri Coach Dennis Gates, and MLB Hall of Famer Tom Henke.

Johnny Scott of Las Cruces, NM continues to maintain the top spot in the MLRA standings after ten events, and will carry the Midwest Sheet Metal spoiler into the weekend. Scott holds a 50 point advantage over two time series champion Chad Simpson, who is a former winner at both Lucas Oil Speedway and the Randolph County Raceway.

The balance of the top five is occupied by a trio of Sunoco Race Fuels Rookie of the year contenders. Kolby Vandenbergh is currently in the third spot and holds a 155 point advantage over fourth place Daniel Hilsabeck while Peoria, AZ driver Steve Stultz rounds out the top five. Chris Simpson, Tad Pospisil, Stormy Scott, Aaron Marrant, and Kaeden Cornell complete the top 10.