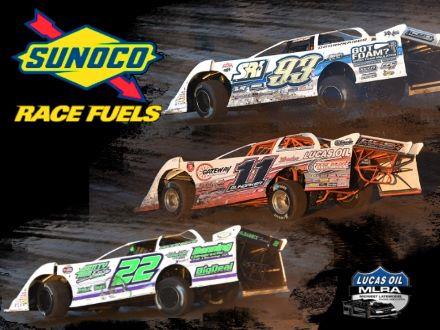 SUNOCO--Fueling The Lucas Oil MLRA Rookie of the Year Award

Wheatland, Missouri (January 5, 2022) – With the turn towards the new year and upcoming 2022 race season, the Lucas Oil Midwest Late Model Racing Association (MLRA) is excited to once again open the doors to a talented group of drivers looking to compete for the SUNOCO Race Fuels Rookie of the Year Award.

Long time series sponsor SUNOCO returns as part of a multi-year deal that inks them not only as the presenting sponsor of the R.O.Y award, but also as the “Official Fuel” of the MLRA series.

SUNOCO, along with 405 Performance Products, a master distributor for SUNOCO Race Fuels will award the top two rookie drivers as follows at the conclusion of the 2022 season:

Lucas Oil MLRA Series Director Ernie Leftwich noted, “On behalf of the MLRA series and our rookie drivers, we are very appreciative of what SUNOCO does for our series. They have been a great partner of ours for many years and provide a great product to the racers. They have helped us to attract a lot of great drivers to the MLRA over the years and we are excited to again offer such a strong rookie program for our drivers thanks to their support.”

The 2022 edition of the Lucas Oil MLRA is currently slated for 27 events with a pair of additional stops still in the works at this time. Drivers interested in challenging for the Rookie of the Year can contact Leftwich at 417-309-3509 for addition registration details.